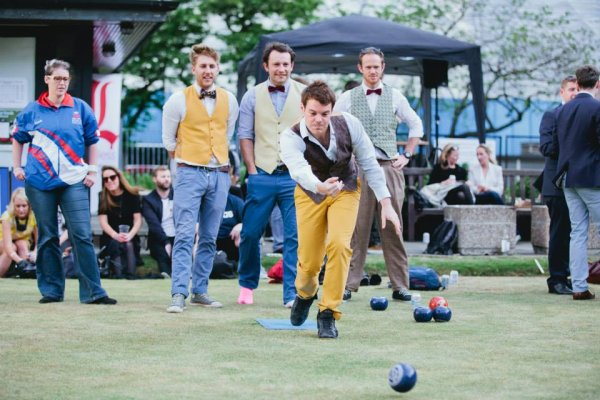 If searching for your pelvic floor on a pilates mat doesn’t set your soul alight, the front crawl no longer tickles your fancy and downward dog doesn’t turn your world upside down, then there are plenty of weird and wacky alternative sports to be found in London. For many of these games, sport and alcohol come hand in hand; a ball in your right and drink in your left.  It’s all part of being a good sport... sure wouldn’t it  be rude not to?  For the other sports on this list, such as rock climbing and trampolining, it’s probably best to leave the pints until you’ve returned to solid ground.  Either way there’s plenty of fun to be had and who knows, you might discover you’re the next Robin Hood of the archery world.

Flight Club has hit the bullseye as a new, exciting genre of sports bar.  Located in the heart of Shoreditch, it should be your first stop for social darts.  With a real-time, on-screen scoring system all you have to do is sit back and relax, until it’s your turn to throw the darts.  You can book an “oche”, which seats up to 12 people, for £20 off-peak (weekdays before 5pm and all day Sunday) or £25 peak time (weekdays after 5pm and all day Saturday).  With an eclectic food and drinks menu, there is everything from draught lager to aptly named cocktails such as the “Cupid’s Arrow” and the “Shanghai Sling”.  Enquire via the website for bookings.

Essentially the traditional game of British lawn bowls, but barefoot so the hippified version.  With the addition of some provocative foot nudity, the stiflingly reserved game was originally undressed by the Australians, to create a more casual social event.  Now in London, Barefoot Bowls events are arranged in conjunction with a live band, pop-up bar and street food stalls, exuding the ultimate festival vibe.  Hundreds of shoeless Londoners have rolled up to previous bouts located at Highbury Fields and Finsbury Square.  Find information about upcoming events at barefootbowls.co.uk.

Table Tennis Fight Club is an exclusive members club, so entry is gained by recommendation from an inside player. Alternatively,  if you think you’ve something special to bring to the table, you can apply online and then beat two of the club’s existing members in a match.  The club opens its doors to the remaining table tennis peasants, on Friday evenings and Sundays.  They also host social evenings which they post about regularly on their facebook page.  The club has locations in King’s Cross, Barbican and Paddington.

Bounce Bar provides a less fight, more psychedelic 80s approach to the game of ping pong.  It currently has two London locations; Farringdon and Shoreditch, with 14 tennis tables in each.  Book a table to fit up to 14 players and spectators, for a night that’ll have you bouncing off the walls.  Other bars with pingpong tables include The Bookclub (Shoreditch), The Game (Earl’s Court) and The Queen of Hoxton (Shoreditch).

If the idea of a room lined with 150 trampolines doesn’t jump start your excitement levels, then you’ve obviously lost touch with your childhood.  Let loose your inner Tigger at Oxygen Freejumping in Acton, the first trampoline park in London.  The centre hosts a variety of bounce based sessions such as age specific freejump hours, dodgeball, fitness classes, teen discos and even has an trampoline academy instructed by Olympic gymnasts.

The electrifying game of French boules where the aim is to bang hollow metal balls into a wooden ball.  If that isn’t enough to peak your interest, the addition of cocktails and wine really knocks the game into gear.  Baranis is the Provence themed bar that’ll transport you from the rainy streets of Chancery Lane to the sunny South of France.  Found in the old stone basement of an auction house, the bar evokes a hidden wine cellar of a French vineyard.  Hire out the indoor, gravelled court, by inquiring on their website, for a game with your most classy friends.  In no time you’ll be swearing like a riled up Frenchman as the competitiveness of the sport takes hold.  In true French style, Baranis is only open Tuesday to Saturday.

Button up your finest blouse and dust off your bowler hat, Croquet East hosts a superbly snooty sporting event in Victoria Park. With the game centering around the excessive consumption of Pimms and cucumber sandwiches, it retains the true essence of the British pastime, but in over the top ironic fashion.  Whilst on pitch snobbery is encouraged, there is an intent lack of elitism with regard to pricing.  Participation is free, but a recommended donation of £3 is encouraged.  These first-class events are held throughout the summer months, so keep a monocled eye on the Croquet East website and prepare yourself for a jolly good time old chap!

With the most competitive corporate ladders in Europe and over 20 climbing centres throughout the city, Londoners have no shortage of things to ascend.  The Arch Climbing Wall has three massive venues, two in Bermondsey and one in Edgware.  The centres offer hundreds of different climbs such as 11,000 square feet of bouldering (low level, wireless rock climbing), a 55 degree climbing wall, rings, bars and a project board.  Climbing shoes and chalk bags are available to rent.  Single admission is £7.50 off-peak or £10 peak time and monthly, quarter annual and annual memberships can be used at all three centres.

Set in an old Victorian water pumping station, The Castle provides a monumental climbing experience, with everything from bouldering to abseiling, spread across six levels.  The 30 metre “Abseil Tower” is probably the coolest thing about this place, as you can rapidly descend through its shaft.  The Castle offers courses to beginners, improvers, corporate groups, private individuals and also runs kids’ climbing clubs.  Visits are £12.50 or £7.50 for concessions and children.

If you’re on the hunt to put a little quiver in your arrows, 2020 Archery Club meets at different locations around London Bridge about 5 times per week.  They run “Have a Go” sessions, costing £25, or 5 week courses for £125 which begin with open shooting (aimed away from participants) and progress firing at a target from a 20 yard range.

The Southfields Archery Club runs open shoot sessions on Monday and Thursday evenings, for just £7 per person (£5 concession).  They have a junior team that competes successfully in London and County level tournaments. 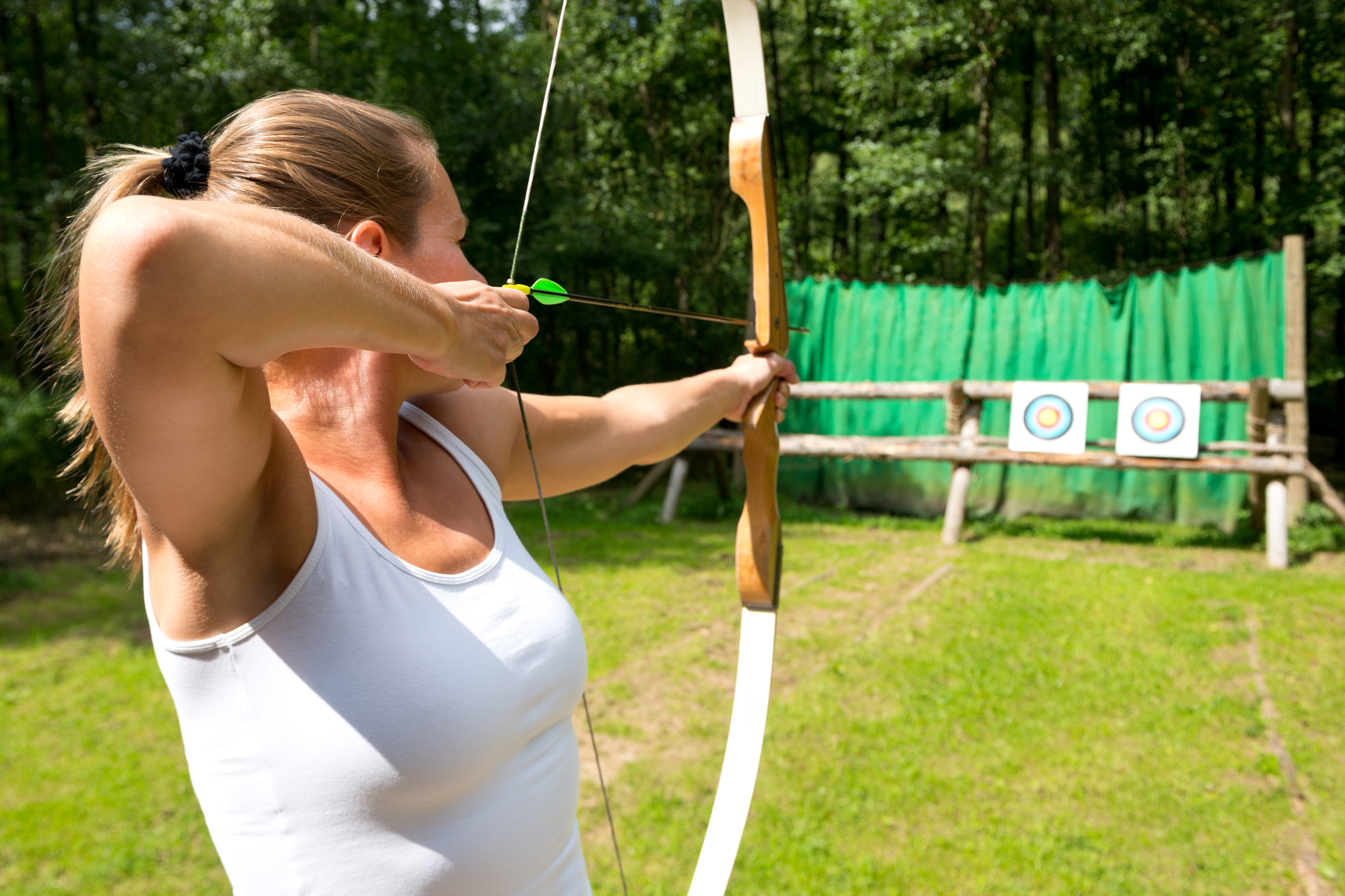 If London during rush hour isn’t enough of a battlefield to activate your panic buttons, Mayhem Paintball can have you airdropped into the midst of a barbarous paint war.  Complete with a genuine Russian T55 battle tank, battle wounded vehicles and abandoned shipping containers, “Call of Duty” maps are replicated in life sized versions, along with other zones such as “Urban”, “Aeroplane Wood” and “Wild West”.  Individual and group bookings, such as corporate outings, kids parties, stag and hen dos can be organised via the website.  Student prices start from £10 and prices begin at £12.50.