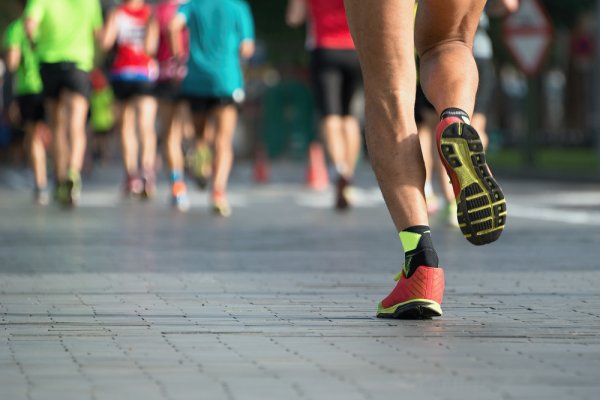 For some people a good spotify playlist and the joy of the jog is enough to get them out the door and into run mode, rain, hail or shine.  For others running a bath is a much more tempting prospect than running a 5k, so a little bit of group motivation is needed to chase them onto the winter streets.  Running as part of a group is not only a great driving force, but is also the safer option, especially if you’re a night time runner or you don’t want to stick to the main roads.  Fellow runners will also encourage a bit of healthy competition, as you force yourself to keep pace with your conversation buddy or overtake the chronically flatulent man ahead.

You’ll also likely pick up tidbits of advice, find out which runners are great for long distance or what post run stretches prevent injury.  If you’re worried you’ll be the tortoise of the group, remember that most run clubs cater to all levels, and the view is better from the back anyway.  So if running lone wolf style isn’t up your alley, there are plenty of packs in London that you can bound alongside.

This club enjoys semi-novelty 10k runs, as they choose to lap London landmarks in the dead of night whilst blasting music from speakers.  Taking the ‘club’ part literally, the nights often culminate with a boogie and drinks in a nightclub.  They also run weekly group runs and exercise bootcamps. All of their events are kept up to date on their Facebook page.

Sweatshop is a leading running shop chain, with 10 stores across London, each of which has its own running club.  Most of the shops provide 5k runs, and longer runs are available from some of the bigger stores.  The runs have guides at both the front and the back of the group, so nobody gets left behind!  They operate a loyalty card system with rewards, so the higher your mileage the better your prize; from an Adidas t-shirt to a pair of trainers.  There is a strong social vibe at the clubs, with some dishing out biscuits and venturing to the pub post run, perhaps a little counter productive calorie-wise, but bloody good fun!

Runners Need is a running shop found throughout London that provides free group runs from their stores.  Their Camden branch hosts a run club on Wednesday evenings and Friday mornings.  Wednesday’s 8km run kicks off at the shop at 7.15pm, but runners should arrive by 7pm.  If you can drag yourself up on time for Friday’s 7am route, you will enjoy a refreshing run around the beautiful Primrose Hill.  Post-run drinks are pretty much a staple for this club, after the evening run that is.

The Hare and Hounds

This is the oldest cross country running club in the world.  They gather on Wednesday evenings in Wimbledon Commons for a 5-10 mile journey.  The evening is rounded off at the wonderful Telegraph Pub on Putney Heath.  Sunday mornings begin at 10am and carry on for 5-15 miles, depending on when the flies start to drop off.  They meet at Robin Hood Gate in Richmond Park and encourage runners of all levels and speeds.  Strictly speaking this isn't a free running club in London as they ask for a £25 annual fee. But that's a nominal price for an unlimited amount of races and they encourage people to trial or participate in a couple of runs before joining.