3G sports pitches in London - Where are they hiding?

3G sports pitches in London - Where are they hiding?

Artificial football pitches in London are in massive demand and short supply. Constructing more of them could certainly help increase sports participation, particularly when they have floodlights. However finding and booking them is a problem. They tend to be located at schools and council sites and it often remains unclear how to book them or when they are available. 3g pitches, which have a rubber crumb surface and have the highest resemblance to real grass, are particularly popular. They're often booked up many weeks in advance by commercial companies or regular players. This is a strong reason why OpenPlay was started, to help find and promote the gaps. So below is a list of recommended 3g pitches in London. You'll find that demand for most of these is huge from Monday to Friday, 6pm to 9pm. However occasional gaps can appear, particularly as you move further out of London and weekend availability is usually pretty good, even at the Central London 3G pitches.

Burgess Park - Elephant & Castle, Southwark This pitch is truly excellent. Superb surface, floodlit, parking on the road nearby, it's a rare example of an 11 a side 3g pitch in London. However Elephant & Castle tube station is quite a walk away (15 minutes' at least) and it is not the most glamorous part of London. Bookings are currently managed by Quadron Services on behalf of Southwark Council and it tends to be fully booked for most of the year from Monday to Thursdays. However like anywhere else, there are cancellations and gaps which do appear. You can all Quadron Services on: 0207 525 5000 or email: southwark.sports@quadronservices.co.uk Catford Soccer Centre - Catford, Lewisham There are plenty of 3g pitches at Catford Soccer Centre, part of St Dunstan's School. There should be ten 5-a-side pitches and one 6-a-side which can all be booked via their dedicated team outside of school hours (6pm to 10pm Monday to Friday and all weekend). They used to be a Goals Soccer Centre before being sold to St Dunstan's School, so they are high quality and have excellent facilities. Furthermore Catford rail station is literally two minutes' walk. One word of warning, their entrance is fairly inconspicuous from the road, accessed off Canadian Avenue to the east of the playing fields. You can call Catford Soccer Centre on 0208 690 1111 or email enquiries@catfordsoccer.co.uk. Chestnut Grove School - Balham, Wandsworth 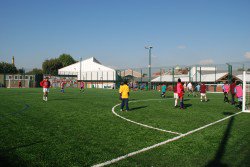 There is a solitary 3G pitch at Chesnut Grove School, conveniently located close to Balham tube and rail station. They're heavily booked out during the week by Go Mammoth and some other 5-a-side football organisations, but availability is good on weekends. Email: Info@chestnutgrove.wandsworth.sch.uk Furzedown Recreation Ground - Tooting, Wandsworth 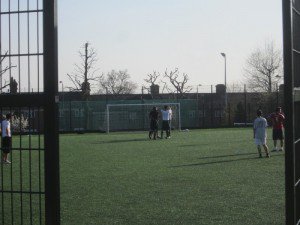 Furzedown Recreation Ground is a well hidden sports facility in Tooting, used by the Grange School during the day and managed by Wandsworth Council outside of those hours. There are two 3G pitches available which are both floodlit and have a rubber crumb surface. There are limited changing facilities available and the only drawback is that the nearest stations are quite a walk away - Tooting Broadway underground station and Tooting rail. To book Furzedown Recreation Ground call the Wandsworth bookings team on 020 8767 6542

Rocks Lane - Barnes, Richmond Rocks Lane is a floodlit sports centre offering 5-a-side, netball and tennis pitches. It has a car park directly outside and there are two 6-a-side 3G football pitches available. There are lots of block-bookings for those pitches but still some late availability during the week, particularly if you are prepared to play as late as 9pm. Cancellations and gaps do also appear. To book the Barnes Rocks Lane astroturf pitches call 020 8876 8330. Westway Sports Centre The Westway is one of London's most notorious sports centres with an excellent range of facilities on offer including indoor climbing, tennis and a gym as well as numerous outdoor pitches wedged together under the A40 flyover. Some of the pitches have a 3g surface and are extremely popular throughout the week. To book the Westway sports pitches you will need to call: 0208 969 0992 Heston Community School - Osterley, Hounslow 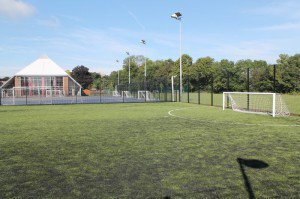 Heston Community School has two artificial football pitches which are ideal for 5-a-side football. One of these was built in the summer of 2013 and has state-of-the-art 3G surface. These pitches are both used by the school up until 5:30pm after which they become available to the public. There is still plenty of availability and they can be booked via OpenPlay at the link below. Heston Community School 3g Pitch Booking 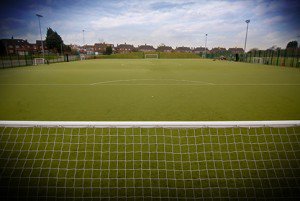 There are two full size 3g pitches available for hire at the Hive, located near Edgware in North London. Many famous footballers have already played on the pitches as they are favoured as training pitches by travelling teams. Notable example examples include the Brazillian national team, Sweden and Egypt. The pitches can be used for 11-a-side football or split up into 5-a-side units too. Booking is available from £40/hour by calling 020 8381 3800


To book any of the seven 3G pitches at Mile End Sports Centre you will need to call the GLL bookings team on: 020 8709 4420 Memorial Recreation Ground - West Ham, Newham There is an excellent full 11-a-side 3G pitch at Memorial Recreation Ground complete with floodlights. The pitch can be split into three or in half depending on whether you want to play 11-a-side, 7-a-side or 5-a-side football. Prices vary whether you are block-booking or just booking part of the pitch as a one-off. Bookings are managed by the East London Community Sports Association (ELCSA) by phoning 07778355580 or emailing bas43@btinternet.com. Drapers Field, Leyton, Waltham Forest Drapers Field Sports Ground is located near the Olympic park in Leyton and offers a 3G 11-a-side football pitch for hire. The nearest underground station is Leyton which is 10 minutes walk away and the changing rooms are located off Temple Mills Lane. To book the Drapers Field 3G pitch call 0208 496 2601 There are plenty of other London 3G sports pitches that have been missed off so if you know of any please add them in the comments below. All of the pitches above can be found on OpenPlay, London's No.1 sports facility finder and some can also be booked online via the site. By Sam Parton