London residents are spoilt for choice when it comes to tennis courts with the capital brimming with both private clubs and public tennis courts. Whilst London tennis clubs can be very expensive, exclusive and full of internal politics, there are plenty of park tennis courts in London on offer, although their quality can be slightly hit and miss.

As a result OpenPlay brings you our selection of the best London park tennis courts  based on our humble opinion and having played at all of them. We have even ranked them in order for you so try them out today!

The tennis centre in Regent's Park operates year-around from 8 a.m. to 8 p.m. to provide tennis fun and competition regardless of season. With 12 courts and facilities accredited by the Lawn Tennis Association, Regent's Park is the top tennis location in north London. The tennis centre at Regent's Park was also the first non-local authority or city council facility to gain this accreditation.

Anyone regardless of playing level can simply ?turn up and play,? though there are membership options for the active tennis player. Coaching is offered for adults from ?Will to Win? and competitive opportunities are available through leagues and tournaments organised at the Regent?s Park Tennis Centre.

To visit the tennis centre, access the western side of Regent's Park near York Bridge. Regent's Park has the largest grass area for sports in London with nearly 100 acres for public recreational use.

The South Park tennis courts have been relatively recently refurbished and it must be said, are in excellent condition for Fulham tennis courts. At the same time that?s exactly what you?d expect from this leafy, affluent part of West London.

The four West London tennis courts lie in the centre of South Park, one of the finest parks in Fulham and have a hard, Macadam surface. They are separated into pairs with benches and a rose bed lying between them. The courts are in very good condition including the nets, lines and perimeter fencing although annoyingly, balls can sneak out the court fairly easily which can be excruciating.

You can book in advance with Fulham Borough Council at approximately £7/hour but you will need to sign up as a member to do so for approximately £40/year. Otherwise you can pay and play and often play for free if no warden is around.

Hyde Park is an ideal tennis option for those who prefer to plan ahead. The public can call ahead up to three days in advance to book any of the six tennis courts, and members of the Hyde Park Tennis Centre can book up to a week in advance for leisurely play or lessons.

Coaching is also offered at Hyde Park through Will to Win. Its six tennis courts are accredited by the Lawn Tennis Association, and other offerings include a changing pavilion, café and garden area.
Hyde Park is open for tennis from 9 a.m. to 9 p.m. in the summer and 10 a.m. to 4 p.m. in the winter.

Another excellent set of Central London tennis courts are

the public courts at Lincoln Inn Fields. These pay 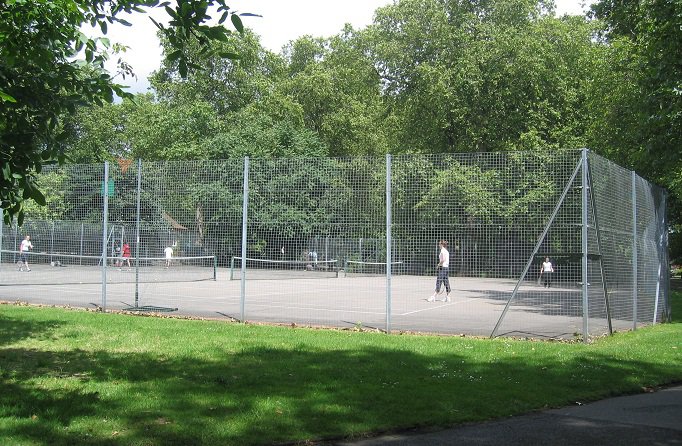 and play tennis courts are in an area of London where space really is at a premium, which makes them particularly popular. Lincoln Inn Fields is a historical public square with three hard (macadam) tennis courts for hire.

Unfortunately floodlights are not available at Lincoln Inn Fields, however the public tennis courts are open from 8am until dusk. Parking in the area is lethally expensive and we would highly recommend avoiding driving at all costs. However the tennis courts in Lincoln Inn Fields are ideally located as they are wedged between Holborn and Chancery Lane tube stations, with the area also very well serviced by buses.

Victoria Park has been an established centre for tennis in London for the past 15 years. Offering both individual and group coaching for all levels of talent, active tennis fans can take advantage of ways to refine their skills on any of the park?s six tennis courts.

Four of the tennis courts in Victoria Park are floodlit, while three of the six are hard tennis courts. The park also provides a pavilion with a refreshment stand, changing facilities, toilets and showers. All offerings are available to the public on a ?pay and play? basis or with membership.

There are eight Clapham Common tennis courts which are situated towards the south side of Clapham Common, less than 5 minutes walk from Clapham South underground station.The tennis courts in Clapham Common are all outdoor, with a hard, macadam surface and some are floodlit. In general the Clapham South tennis courts are in excellent condition, having been relatively recently renovated, with a flat, even surface which isn't always given at other park tennis courts... As a result they are extremely popular throughout the year, especially after work from 5pm.

Clapham Common Tennis courts booking can be carried over the phone via the GLL booking line or by paying the court attendant in the adjacent tennis hut. However we strongly advise booking Clapham Common tennis courts in advance given their considerable popularity and to therefore avoid disappointment.

For a post tennis match drink we highly recommend heading to the Windmill pub often referred to as 'the Windmill on the common' which is located 5 mins walk from the courts on Windmill Drive. 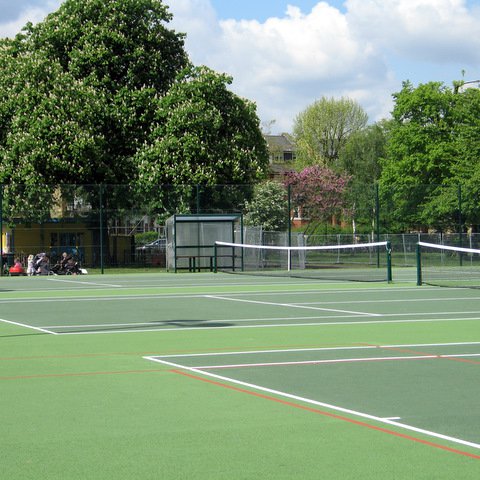 is a great place to park if you are playing tennis or any other sport, but remember to pay and display. Alternatively there are plenty of pay and display residential roads in the Clapham South area, just watch out for traffic wardens who roam the area like sharks...
Finally to get to the Clapham tennis courts, aside from driving, your best bet is Clapham South tube station, a short walk away. The area is also well served by buses and Clapham Junction is approximately 25 minutes walk away to the north of Clapham Common.
Click here for further information about Clapham Common Tennis Courts

Finally if you are still struggling trying to find where to play tennis in London we recommend using our London tennis court finder to find a tennis court near you!