Football is for Everyone: How to Get Involved if You're Disabled

Football is for Everyone: How to Get Involved if You're Disabled

By Jenni Dixon Are you an enthusiastic spectator who spends a lot of your spare time watching the game? Maybe you're a regular at your local pub so you can watch the sports channel? Perhaps you're now fed up and want to join in instead of just watching but you're disabled and not sure how? Thankfully, in the 21st century inclusion is better than ever before and there are opportunities for you to participate even if you have a disability.

If you have depression or another mental health disorder such as an eating disorder, you may find light exercise in a friendly football game beneficial to your health. This is because exercise heightens self-esteem, reduces depression and improves mood and body-image. In people who were not addicted to exercise and not severely underweight, gentle exercise had a positive effect, leading researchers to theorise that it could be used as a preventative and treatment for depression and eating disorders. Always ask your doctor for advice if you have a pre-existing illness and are considering taking up sport.

Football for the Blind or Partially Sighted 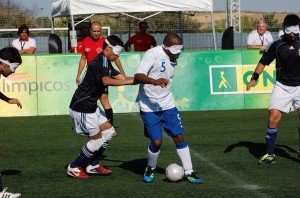 If you have vision problems, are partially sighted or even blind, you could still play. More and more sports equipment is being adapted to meet the needs of players with special requirements and a ball has been designed that emits sounds when it is kicked so that players who can't use sight can judge where the ball is from where the sound is coming from. The Football Association (FA) heads both the England Partially Sighted Team and the England Blind Team. These teams have competed in world championships hosted in countries such as Japan and Turkey, giving young disabled footballers the chance to flaunt their talent on an international stage.

Football for the Deaf

There is also an England Deaf Team run by the FA and 25 deaf football clubs spread throughout the UK. These football clubs give deaf people with footballing aptitude the chance to be part of a team and win the British Deaf Football Cup, a prize that is given out annually. Far from being a new inclusion initiative, this prize has been awarded since 1959. Britain boasts one of the oldest deaf football clubs in the world. The Glasgow Athletic Deaf Football Club was founded in 1871. It was followed by other famous clubs like Rangers FC in 1873, Celtic in 1881 and Manchester United in 1878. Blind, partially sighted and deaf players have participated in matches against each other - such as one arranged by St. George's Park as part of the England Deaf Team's training for the European qualifier in Oslo. In order to be part of a deaf team, players must have a hearing loss of 55 decibels or more in their 'better' ear. They must also remove any hearing aids during games. You can join a team by contacting your local disability football club. Many clubs offer training from beginner levels to people of all ages. If you're a young person, you can also check with your school, college or local sports centre to see if they provide any disabled football facilities.

Football for People with Cerebral Palsy

People with cerebral palsy can join the National Cerebral Palsy Football League and a local PAN-disability football club, if they are able to play upright (not in a wheelchair). There are also games that are specifically geared towards cerebral palsy and match rules are changed to accommodate it. A seven-a-side version of the game is usually played, with a smaller playing area and smaller goals. Players are allowed to throw or roll the ball back into play and there is no off-side, making the game more accessible for players with mobility needs. 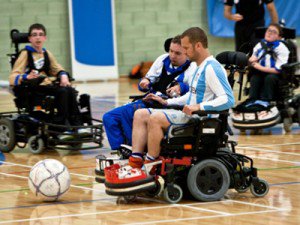