Starting a tennis coaching business (let alone any other business) is never easy. Meet Dino Skeete from Serious About Tennis, an accomplished LTA Level 4 Senior Performance, and LTA Senior Club Coach. He's embarking on the challenging task of turning the utilised tennis courts at Hillside Gardens Park near Tulse Hill into a thriving tennis hub, with a mix of coaching, pay and play and social tennis for all ages and abilities. We caught up with him to hear a bit more about what he is up to and the challenges he faces on his journey. Tell us about you Dino, how long have you been coaching tennis? I'm an LTA Level 4 Senior Performance Coach with over 22 years experience so know what I'm talking about. Not to blow my own trumpet but I'm a National Seniors Division 1 Country Tennis player for Kent and ranked in the top 10 over 45's in the UK. 2. From a technical perspective who is your favourite tennis player (from any era) and why? 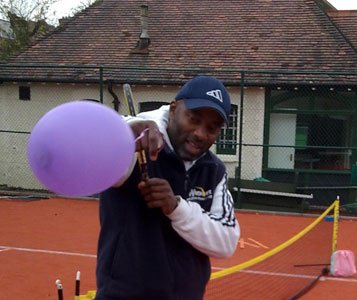 I don?t have a particular favourite tennis player. I like to take specific skills from different players and use them to help players understand how best to use them to improve their own technique. For example Richard Gasquet?s single handed backhand, Nadal?s lasso forehand, Serena William?s service, or John Mcenroe?s half volley. If you had to push me I?d have to admit that Fabrice Santoro, Geal Monfils and Roger Federer have been my favourite players to watch. 3. Which is better, a one-handed back-hand or two-handed? I don?t believe the single handed backhand is better than the double-handed backhand, or visa versa. It is more important to consider which shot is the most effective for the individual, and most likely to help them avoid injury. It?s almost like asking which hand is better to play with, left or right? Statistically I would imagine that it?s better to be a lefty and have a double handed backhand if you want to win more matches. 4. What is your organisation Serious About Tennis (SAT) aiming to do? My organisation ?Serious About Tennis? is aiming to give players of all abilities up to and including County standard juniors a rewarding opportunity to learn tennis in a progressive way. We help players understand where they are and what they need to do to help them grow towards their next level as a tennis player. 5. Where do your sessions take place? My sessions take place at Hillside Gardens Park, Streatham Hill / Tulse Hill; Streatham Leisure Centre; and Streatham Vale Park. 6. How do people join in your sessions? You can book online via Serious About Tennis or OpenPlay and find out about forthcoming sessions too. If you want me to run anything else just let me know! 7. What do you think has been your greatest challenge getting your venture off the ground? So far, I think the greatest challenge getting my venture off the ground has been to get a programme that fits with the unknown demand that surrounds the venue. There are many different aspects to growing a new programme. Especially when there is no programme in place beforehand. 8. How do we produce another Andy Murray? If you want to produce another Andy Murray you need to do provide the smartest; the toughest; and the most athletic British tennis athletes the best opportunity to be better than the best tennis athletes from other nations. Then that individual has to make the very most of the opportunity given them. I heard that if John Mcenroe was playing his professional career at the same time as Federer, McEnroe would have done whatever it took for him to be the best, or at least one of the best players on tour. I think it?s fair to say that many British tennis players have had as good an opportunity as players from other tennis nations to become one of the World?s top 200 or lower ranked players. Unfortunately few coaches and players know what it takes to go higher than this. Work ethic is probably the number one key to achieving Andy Murray?s heady achievements. I?ll do my best to give a few hundred young players a fun start though. 9. Any quick tips you can give tennis players based on your expertise? What you put in is what you get out. Find a good coach then learn what you need to do to get to the different levels of play. Be realistic. It takes a lot of time and effort to become a good player and even more time and effort to become a Club or County champion. Dino Skeete is the co-founder of Serious About Tennis which offers tennis coaching near Streatham. To find out more about his sessions go to www.seriousabouttennis.com or you can book online via the Hillside Gardens Park website or OpenPlay.