So the Premier League announces a £5.1 billion deal for the television rights to broadcast Premier League matches between 2016-2019. This is an enormous leap of around 70% from the current £3.018 billion set until 2016. The two main bidders were BT Sport and Sky Sports who were in a fierce bidding war, prepared to pay over £10 million per match for the highly coveted broadcasting rights. On the face of it this sum seems eye-watering, especially since typically you can expect between 1.6 million to 2 million viewers a match. So roughly £5 per viewer per match? Is that really a good ROI? It seems expensive. 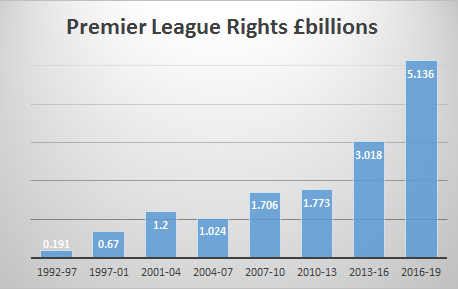 But actually the battle reaches far beyond just sport. Ultimately for BT and Sky Sports, the real war is dominating the home media market. The Premier League rights are just a battle. If you think about the lucrative home broadband, telephone and general TV package market and suddenly it makes more sense. You would also think that this flood of cash to premier league clubs is positive. It allows them to attract the best foreign talent, build better training facilities and increase player wages to keep their stars in the UK. That in turn allows the 'show' as Richard Scudamore likes to call it, to go on. If anything this whole cycle increases the value of the Premier League. Win-win surely? For the main yes. Some argue that the more cash football clubs have, the more foreign talent they attract and the fewer opportunities for home grown players. However the real issue is what about the two million grassroots football players across the country? How will this benefit them or will it even benefit them? The simple answer is yes they will certainly benefit, but not enough. Below are some of the common issues with grassroots football and whether this influx of Premier League cash can help or make the difference so badly needed.

The Premier League outlined that it will build 152 new 3G football pitches across the country and invest £168 million in facilities and good causes. That investment is certainly welcoming, the more 3G pitches the better, particularly in schools and parks. This will certainly help provide more opportunities for kids to play football, particularly if they are equipped with floodlights. However a lot more are needed to prevent the massive decline in football participation, such as over 150,000 last year alone.

Another huge issue is the state of grass pitches in the UK. Across the 65,000 or so pitches in the UK, the standard can be absolutely shocking, particularly amongst those owned by local authorities. Sadly 98% of grass pitches are loss making and as budgets get cut, many are under severe threat. Particularly when there is a national housing shortage. It is going to take a lot more than the £168 million earmarked by the Premier League over four years to convert the 50% of grass pitches to a playable standard. We are talking levelling, drainage and changing rooms which is hugely expensive and probably around £6.5 billion to sort out every pitch in the UK. The Premier League and FA simply need to do more than what they have outlined.

3. Not enough filtering down to grassroots

The sad reality is that only around 5% of the Premier League's income filters down to grassroots sport, so basically peanuts. The vast majority goes on player wages and agents fees who are the real winners of this. Is there a way to increase the 5%? Unlikely on Richard Scudamore's watch. How about introducing a tiny levy on all player transfers to helps grassroots or say 0.5%? Is that too much to ask? Also just one week of Wayne Rooney's wages could fund three new floodlit football pitches in one of the poorest parts of London. Surely something can be done to address this mismatch? Forget the new Ferrari Wayne.

Grassroots football is totally reliant on volunteers to manage teams, sift through the administration, organise coaching sessions and do everything else in between. They are the heroes and need to be encouraged. It is all very well outlining funding for them, but the FA in particular needs to address the huge paper burden placed on league administrators and team managers as well as the rising costs of pitch hire and transport. Overall the extra cash from the Premier League is a welcome addition to grassroots football, but there's no getting away from the fact that the real beneficiaries are the premier league players and their agents. By Sam Parton Sam is co-founder of OpenPlay which offers a football player finder as well as a marketplace for grassroots sport and activities.