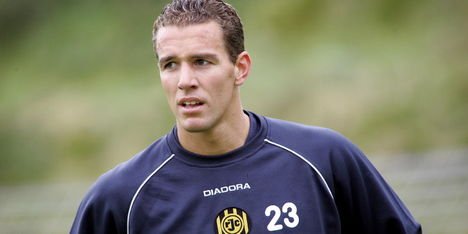 We'd also be grateful if you shed some light on the history of any of these brilliantly named players...

Norman Conquest, was a goalkeeper, unfortunately remembered for shipping 17 goals in one game. However his invasive name more than makes up for his abilities.

You really could not design a more apt name for a footballer. Mark De Man is Belgian and plays for KSC Hasselt

He is a German football official who has had dealings with Vfl Wolfsburg and more recently Borussia Monchengladbach.

Goodwillie is a young Scottish striker for Dundee United who has been involved with a few controversies in his short career so far...

A Zimbabwean defender who plays for Kiglon Bird FC. Unfortunately he is better known for his unique name rather than his footballing abilities.

Fabian Assman is an Argentian goalkeeper playing for Independiente in the Primera División in Argentina. A really good question for any goalkeeper is 'do you prefer Seaman or Assman?'

Haas played for Sunderland and West Bromwich Albion, where he supposedly was famous for eating hot curries...

38-year-old Fucks is now retired having played from 1992 to 2007 with 10 different teams across the world. You can imagine the field day journalists had every time he changed club...

Chiqui Arce played right back for Paraguay in the 1998 and 2002 World Cups.

Pronounced 'naughaty naughtay', he is a talented Ghanian defender, plagued by injuries who was part of the Chelsea Academy and is currently looking for a new club.

An Australian who played for Swindon and Kilmarnock where he single-handedly saved Swindon from relegation in 2001/02 making him truly invincible.

Is a former player for FC Kaiserslautern and now German football coach. What a brilliant name he has, reminds us of ?Neville Neville? ? Gary Neville?s father.

Muff is a retired Swiss striker who played from 1999 to 2009 with two appearances for Switzerland. Unfortunately his career was blighted by injuries.

It would be a travesty no to have one of England's most legendary goalkeepers (and a fine ice skater too) on this list.

Minge played his entire career at Dynamo Dresden, also representing East Germany on the international scene no less than 36 times and is now a manager.

Shittu is a 32-year-old Nigerian centre-back who now plays for Milwall. He began his career in 1991 and has also played for QPR, Bolton, and Watford.

This 40-year-old Scottish striker played over 400 professional games for the likes of Arsenal, Leicester City, Blackburn Rovers and Man City. He is now manager of Doncaster Rovers.

Milan is a Czech defender once linked to Manchester City and Leeds. Unfortunately his career never really took off which makes his excellent name kind of relevant.

Was a former Middlesbrough striker, helping them win promotion to the Premier League and obtaining cult status before he was brutally dropped despite scoring 9 goals in 13 games.

Supposedly an Algerian footballer in the 1970s, there seems to be thin evidence of his existence but he is certainly included either way.

Rod Fanni plays for Marseille in French Ligue 1 and has five caps for the France. For some reason his name makes us laugh the most?

Otherwise known as Paulista (little wonder he chose that), Creedence is a Brazilian striker for Santa Cruz. Over the years he has become frustrated by his reputation for his great name, rather than footballing abilities.

A talented sportsman, Dean Windass was a Striker for Hull City, Bradford City and several other clubs with 732 games and 234 goals.

A talented German midfielder who players for Bayer Leverkusen.

Kuntz was a prolific striker who played from 1980 to 1999. He had 25 caps for Germany and is now chairman of FC Kaiserslautern in Germany

Brian Pinas is a dutch player who was infamously signed by Newcastle United but never made an appearance for them. He was ridiculed in an unsporting fashion by The Sun newspaper for having a surname which sounds like 'penis'.

If you liked this article you may also enjoy the following:

Best 5 a side team names