Where to Play Sport In London - Part W

Where to Play Sport In London - Part W 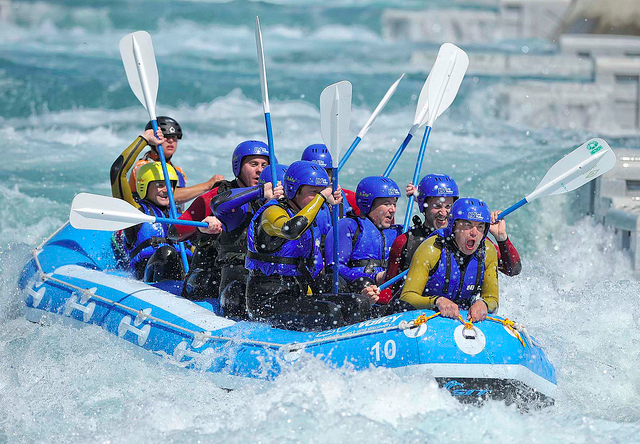 Image by Mike King in the Londonist Flickr pool. Continuing our journey around the capital?s sporting opportunities, alphabetically.

A particular favourite of Prince William, who was part of the Eton team, water polo is very physical, requiring strong swimming and hand-eye coordination skills. There are plenty of swimming pools that cater for water polo, such as GLL leisure centres including the Crystal Palace National Sports Centre and Queen Mother Sports Centre. Several London schools also offer swimming pools with water polo nets such as St Pauls, Dulwich College Sports Club, Ernest Bevin and Highgate School. Examples of water polo clubs in London include The Penguins based around Fulham and Otter Water Polo who train in Hammersmith and Crystal Palace. For more serious players and teams, check out the British Water Polo League.

Contrary to popular belief, you don?t need a speedboat in order to water ski. This can be achieved using an automatic cable tow, think snow ?drag lift? for water skis. This helps reduce the price of waterski lessons and the perfect example is JBSki Wakeboard and Waterski, located in Chertsey, next to Thorpe Park on the outskirts of London. Whether you are a complete beginner or advanced, it has all the facilities and courses you could possibly need, and hires out all equipment. Other examples of water-skiing centres near London are Denham Waterski in Buckinghamshire and Action Water Sports in Kent, however these do not offer cable towing.

A rare sport to get into on a casual basis yet it has a very dedicated fan base. Weightlifting has overlaps with body-building but is less about physical aesthetics and more about actual strength and technique. Dedicated weightlifting gyms in London are rare. Bethnal Green Weightlifting Club is the most renowned. It has four Olympic lifting platforms and beginner courses available on Saturdays. Squats Gym in Streatham and Luckys Gyms in Lewisham and Hither Green are other notable picks. Their collective messages politely suggest that if you are not dedicated, kindly go elsewhere. For a complete list of weightlifting clubs, head to the British Weight Lifting website, which has a detailed club finder.

This sport is simply exhilarating, involving a group of around six to ten people in an inflatable raft, negotiating rapids, whirlpools and other river challenges. While a raging river such as the Zambesi is preferential, the Lee Valley rafting centre is London?s answer. It has a 300m Olympic Standard Competition Course with a 5.5m drop or a shorter 160m ?Legacy Loop? with a 1.6m drop, which is better for children (and scaredy-cats). Lessons are on offer from only £49, with discounts for larger groups and corporate packages available. Unlike conventional river white-water rafting, the course will automatically take you back to the beginning again, saving you a shivering coach trip. There is also a bar for afterwards.

Windsurfing on the River Thames is ill-advised, given the risk of swallowing a bit more than you bargained for, so instead head to the Welsh Harp Sailing Club near Brent Cross where there a windsurfing club runs from April to September. Free training andtaster sessions are available every Thursday. Costs are kept to a minimum as the club is non-profit making. Another suitable windsurfing option is the Queen Mary Sailing Club in Ashford, near Staines, with the weekend rate at £16/day or £75 a month for the truly dedicated. Finally, Datchet Watersports near Windsor also offers lessons and windsurf hire with a RYA start windsurfing course from £179.

Having been reinstated as an Olympic sport ahead of squash there is still a chance for aspiring Londoners to stake their claim for a Rio 2016 Olympics spot. Wrestling is a combat sport where the object is to gain a superior position to your opponent using grappling, throws and takedowns. Many couples naturally do this, but there is a more competitive version, too. The main London wrestling clubs include Lewisham Wrestling Club, London Shootfighters and Legion Wrestling. These all offer classes and taster sessions, with the Lewisham Wrestling Club particularly good for children and youths. The British Wrestling Association also has a wrestling club finder. By Sam Parton