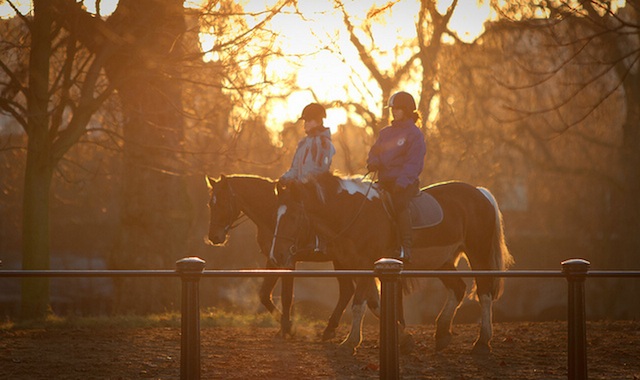 Image by Luke Robinson in the Londonist Flickr pool.

A guide to playing sport in London for sports beginning with E. See the bottom of the article for parts A-D.

Equestrian
Interest in horse-riding has galloped forward on the back of Olympic success from Zara Phillips and her eventing team. The great appeal is that it suits all ages and, unlike many other sports, you often get better with age ? Nick Skelton, for example, was 54 when he won his Olympic gold. Despite being an urban centre, London has a good selection of riding stables, particularly around the larger parks such as Richmond and Hyde Park. The most prestigious on offer are Hyde Park Stables and the Ross Nye Stables in Lancaster Gate, which are also London?s most central riding stables. Wimbledon Common is a fine place to ride with Wimbledon Village Stables and Ridgway Stables offering a variety of riding deals and courses. Other notable venues are the Dulwich Riding Centre with excursions around leafy Dulwich Park and the London Equestrian Centre in Finchley. Finally, horse-riding deals can be found regularly on Groupon and other daily deal sites if you?d like an inexpensive taster.

English billiards
English billiards originated in 1885. It?s in the snooker family but has a classical English twist. Often referred to as simply ?billiards? it involves two teams or players scoring points by pocketing balls or through cannons (two or more balls colliding). Unlike snooker, there are only three balls used, a ?cue ball? for each team or player and a red ?object ball?. The official governing body is the English Amateur Billiards Association which has details of upcoming tournaments and all things billiards on its website. Arguably the most prestigious billiard venue in London is the Sanderson Hotel near Oxford Circus with its antique silver-leafed billiard table. Alternatively many of the other London snooker venues such as Riley?s in Victoria and Twickenham and the Hurricane Rooms chain offer billiards alongside snooker.

Endurance Running
Endurance running has seen a surge in popularity thanks to Mo Farah and the Brownlee brothers at the summer Olympics. Barriers to participation should be low as essentially all you need are a pair of trainers, yourself and space to run. However, self-motivation is a major obstacle, which is where running clubs such as Parkrun are ideal. You can drop into running sessions as you please and run with other like-minded, friendly individuals. They also push you a bit further then you probably would otherwise. It is also important to set yourself goals, and Run England offers a running club finder and details of the latest running events which help give you something to strive for. Running clubs are springing up all over, and a particular favourite is the Serpentine Running Club in Hyde Park. The ultimate event is the extremely popular London marathon, with places allocated through a ballot. Otherwise you can always enter via a charity, in which case you?ll need to beg your family and friends for sponsorship.

Extreme Sports
Extreme sports often require mountains, so London is at an obvious disadvantage. However, adrenaline junkies can still get their fix in around the capital. 160ft bungee jumping is offered at the O2 arena for around £75. For parachute action, you might head to Skydive London, approximately 60 minutes outside the capital for two-mile skydives. However, that is not is not for the thin-walleted, so also outside the city is the much more affordable Bodyflight Centre in Bedford. This offers the world?s largest indoor skydiving centre with wind speeds of up to 180 mph. Other extreme sports venues near London include the Snow Centre in Hemel Hempstead, which offers jumps as well as a 160m slope; and white-water rafting at the Lee Valley water Centre.

By Sam Parton (Founder of OpenPlay)