The wonderful borough of Lambeth contains an eclectic mix of cultures and areas, covering sunny delights such as Brixton, Herne Hill, West Norwood, Clapham, Streatham and Vauxhall. Unsurprisingly it offers a broad range of parks, many of which have public tennis courts. In fact there are 12 Lambeth parks with tennis courts and over 44 Lambeth Tennis Courts to choose from across the borough, some of which are still free to use. Even better news is that many of these are in the process of being handed to the community through the Lambeth Cooperative Parks programme. Lambeth council drastically needing to reduce their parks budget in the light of increased budgetary constraints. The result will be increased local ownership of the various Lambeth park sports facilities and with that there is a big opportunity to get more people using them. Examples of Lambeth tennis courts are numerous, some of which are in superb condition: 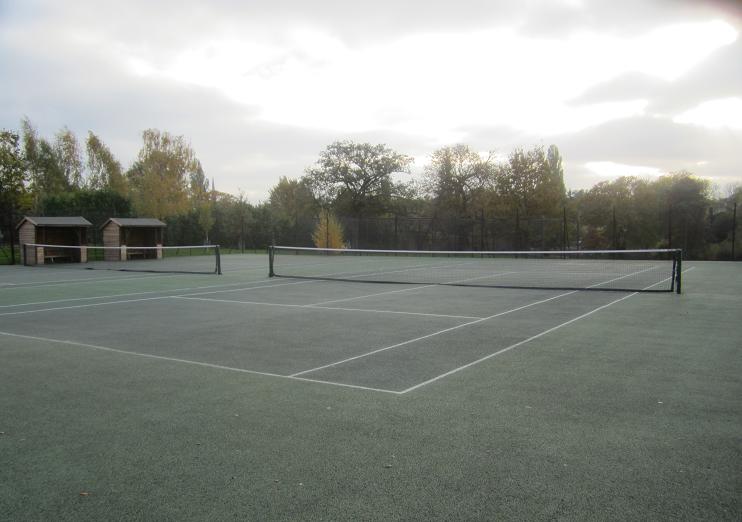 There are six public tennis courts in Brockwell Park There are six tennis courts on offer in Brockwell Park, which lies between Herne Hill, Brixton and Dulwich. The Brockwell Park tennis courts lie in the very centre of the park and offer a fantastic vantage point overlooking London making them a rather unique setting for a game of tennis. Tennis coaching is on offer through Lifetime Tennis who have a good selection of courses, camps and private coaching for people of all ages. Where to drink afterwards: Try the Florence in Herne Hill. Great outdoor sitting area in the summer and fish finger sandwiches too...

This is the busiest set of tennis courts in Lambeth with eight courts available to the public. Five of the course are floodlit and all of the courts have been relatively recently resurfaced. A full coaching programme is on offer adjacent to the tennis courts for all ages run by the excellent Julian Cousins and his coaching team. Booking is still carried out through GLL, with online booking possible too from around £8-10 an hour. A word of warning is that the tennis courts Clapham Common are incredibly popular so you will usually need to book advance, even in winter. Parking is available on the nearby roads and is free after 5pm.

The Rosendale Playing Fields have somehow been forgotten, with most of their sports facilities lying idle for the majority of the time. Sadly this is often the case with many of the London park sports facilities. However there are five tennis courts which can all be used by the public via pay and play. Furthermore they can be booked online through OpenPlay for around £5/hour. These courts badly need playing on as they are in fact in good enough condition, with relatively new nets. Any proceeds from their booking are used to improve the condition of the courts. 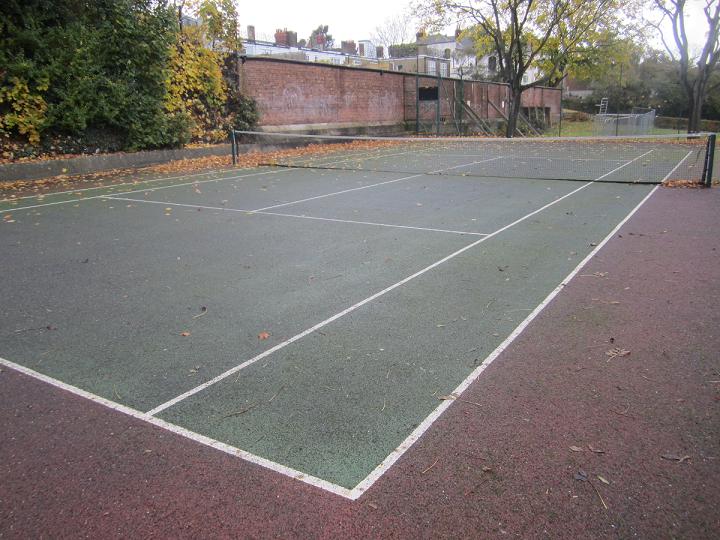 The Hillside Gardens Tennis Courts are sheltered and quiet There are four tennis courts at Hillside Gardens which are fairly well hidden between Streatham and Tulse Hill. All four courts can be booked through GLL and have a reasonable playing surface. Perhaps their main attraction is that they very quiet and secluded, with two of the courts flanked by walls thereby reducing the wind. There is a tennis coach operating on the Hillside Gardens tennis courts and social sessions too run by some local community members. Free parking is available directly outside Hillside Gardens on the adjacent roads and the nearest stations are Tulse Hill and Streatham Hill (15 minutes' walk)

There are two tennis courts in Myatt's Fields which lies in Camberwell. These courts are separate from the GLL contract and be booked through the dedicated Myatt's Fields manager although they are currently recognised as a 'community site' so advanced booking is currently needed if you don't want to. To speak to the Myatt's Fields park manager call 020 7926 6240.

There are two public tennis courts in Vauxhall Park which are closest to Fentiman Road. They can be booked through GLL and offer a reasonable playing surface, but no floodlights. Obviously the nearest station is Vauxhall which is only around 5 minutes' walk away.

The four Ruskin Park tennis courts have certainly seen better days and could badly do with resurfacing and new nets. However they are in good enough condition to play sit idle for much of the year, although their popularity increases in the summer. 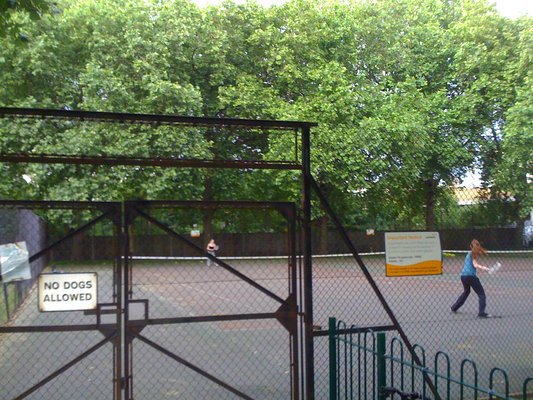 There are two tennis courts in Larkhall Park which fall under the GLL contract and can be booked through them. Their surface isn't brilliant and they don't have floodlights, but they are in a good location just off the wandsworth Raod and there is a café within Larkhall Park making it a good place for a social game of tennis in London.

There are three tennis courts in Streatham Vale which are at the South Western periphery of Lambeth before it heads into the scary realms of Merton. The three courts on offer are currently free to use although one of them has a slight tree root problem which results in a fairly uneven playing surface. However it is still perfectly playable and these courts become popular in the summer as is typical of most London tennis facilities. The nearest train station to the tennis courts in Streatham Vale Park is Streatham Common which is approximately 10 mintues' walk away.

There is a solitary tennis court at the Rookery which is located towards the top of Streatham Common and fairly well hidden from public view. In fact it is in excellent condition having been relatively recently refurbished and furthermore well sheltered due to the surrounding trees. It is actually one of the best public tennis courts in London given its quiet, fairly private location. Booking can currently be carried out through GLL for around £5/hour. By Sam Parton